Camel Trekking in the Sahara

The view of our camels moving past the steep orange dunes at Erg Chebbi in southeastern Morocco made for terrific photos, and when the Berber kid who was leading my camel Gerard saw me squirming and twisting in my saddle to take photos, he would spin my camel around to make my job easier. As time went on, the kid really got into it and would lead Gerard away from the group when he saw a photo opportunity looming, spin me around, and point out the view. The kid had an uncanny sense of what would make a terrific image, so when we finally said goodbye to our camel drivers, I slipped the kid my Swiss Army knife for all his help. 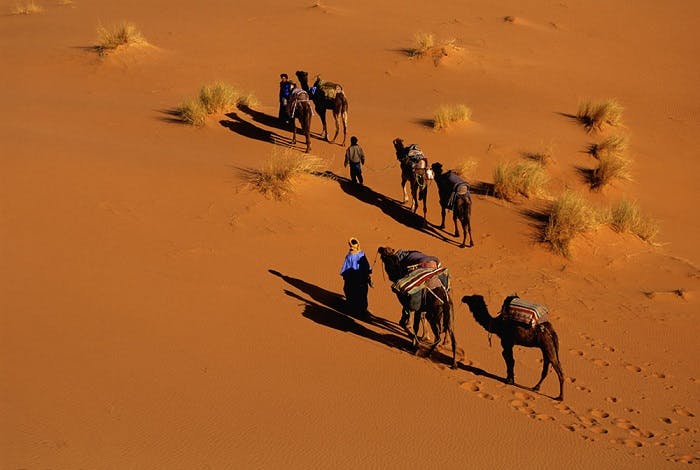 When we stopped for lunch that day, our drivers drew a game board in the sand and used stones and camel droppings to designate the light and dark pieces. The stones were the dark ones.
When we stopped for the day at tea time, we set up our campsite at the base of Erg Chebbi’s 800-foot dune. 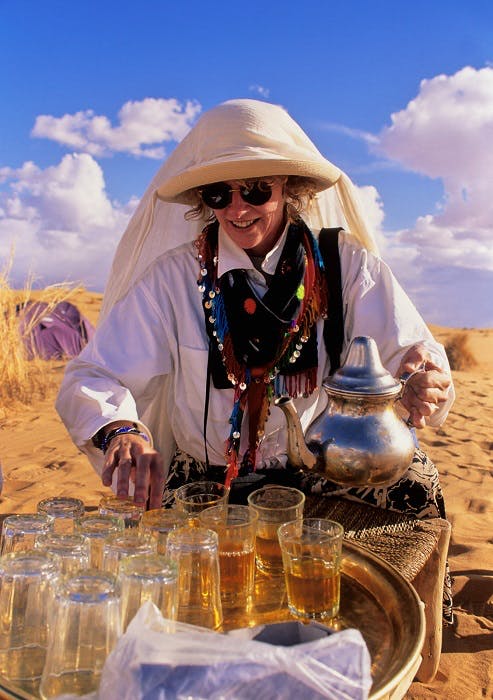 After tea, we shifted to wine; nothing like a mellow buzz on a warm, sunny afternoon in the Sahara. Within minutes, however, the wind began to blow, the temperature plummeted, and it began to rain. While we huddled out of the elements in our dining tent, we were served a lamb, vegetable, and potato tajine, and while the storm raged outside, we got to know one another other better by swapping our best stories. 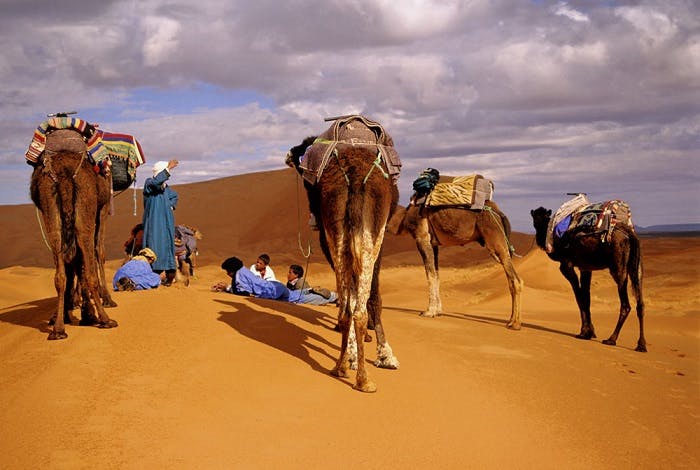 The next morning we divided into teams. “A” team would hike over the 800-foot dune, and “B” team would ride camels around the dune. We would meet at a small oasis on the far side.
Because the rain had packed the dune, the climbing was a little easier, but it was still a struggle. Since we slid down one foot for every three we climbed, the 800-foot dune became a 1,200-foot dune. The view of the vast sweep of the Sahara from the top of that dune seemed to swallow up our rather insignificant camel caravan below. 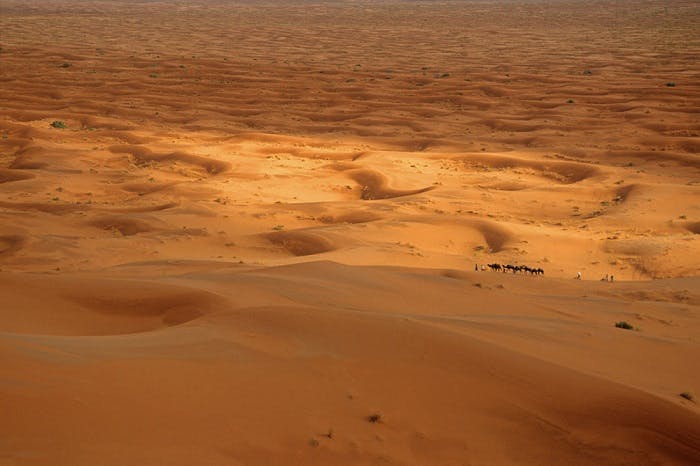 Once over the crest of the dune, our view was of nothing but blue sky and orange dunes. The light on the dunes was flat except where spectacular sunlight poked through holes in the clouds and turned the dunes to a fiery orange.

Having climbed up 800 feet, we’d earned a chance to run down 800 feet. However, I lost my footing and tumbled “ass over tea kettle” for fifty yards. I was glad my camera was in a Ziplock baggie. 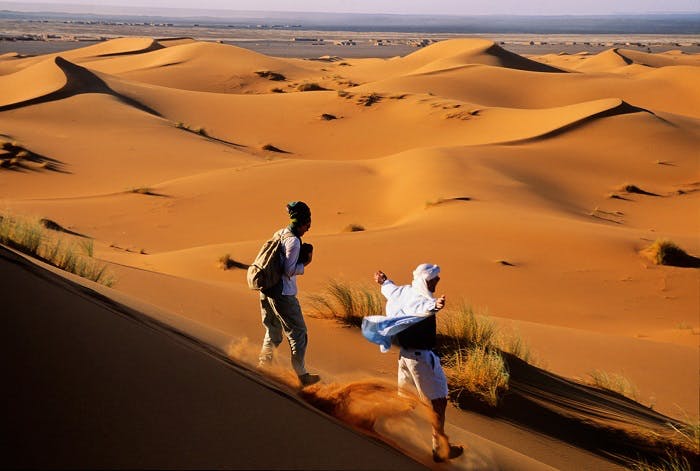 Once we rejoined “B” team, we led our camels out of the dunes to the tent where lunch was being served. While we ate, the sky over Algeria, forty kilometers to the east, became as black as coal, and rain fell in sheets. Dust devils danced across the plains just in front of us and made for great photos against the dark sky beyond.

Back on our camels, we made our way across the hammada, the flat, pebble-littered, hard-packed sand that covers 70% of the Sahara, to the main north-south, east-west intersection for that part of the desert. Where vague tire tracks formed a cross, a single white stone among the millions of black ones proved an adequate marker. We signaled for a left turn and followed the tracks west to a French cafe.

The back patio of the cafe overlooked a rent-a-camel lot, and we sat in the sun, happy to be off our camels for a while, and enjoyed our first soda in days.

The sun, which had clouded over during lunch, reappeared, and the last section of dunes was the most spectacular.

It was late afternoon when we said good-bye to our camel drivers, jumped back in the Land Rovers, and flew over the desert to Erfoud following tire tracks when we could find them and leaving our own when we couldn’t.

About the Author Jim Yost