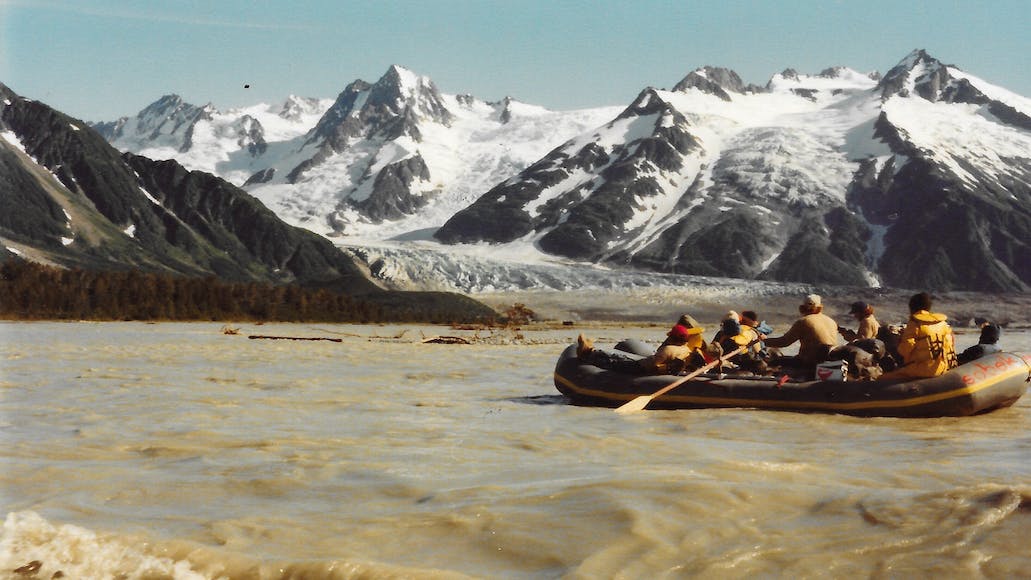 Rafting the Tatshenshini & Alsek Rivers in 1978 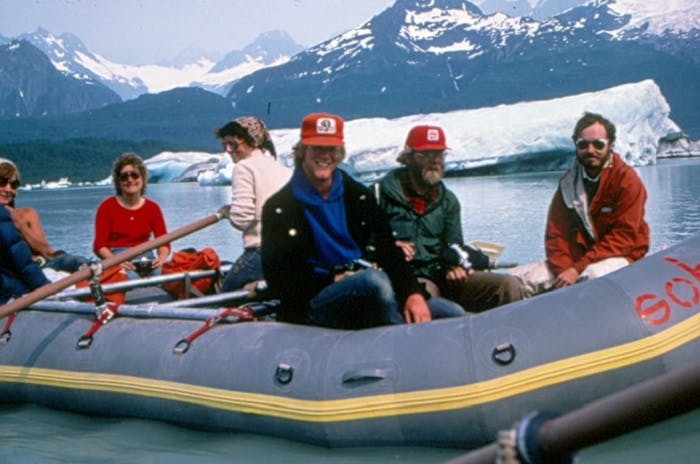 On July 22, 1978, the Tatshenshini River welcomed me to its realm. It was peaceful that night. The next morning, after we put in, the calm meandering river changed. In a heartbeat, the rafts were tossing and crashing into rocks and eddies, and bouncing off the gorge. At one point I flew up and backwards as my raft folded in half. Bart Henderson, our expedition leader, was behind me. He picked his boot up and solidly kicked me back down. If he hadn’t, I would have been catapulted right off the back of the raft. From that point on, I felt the welcoming embrace of the Tatshenshini. 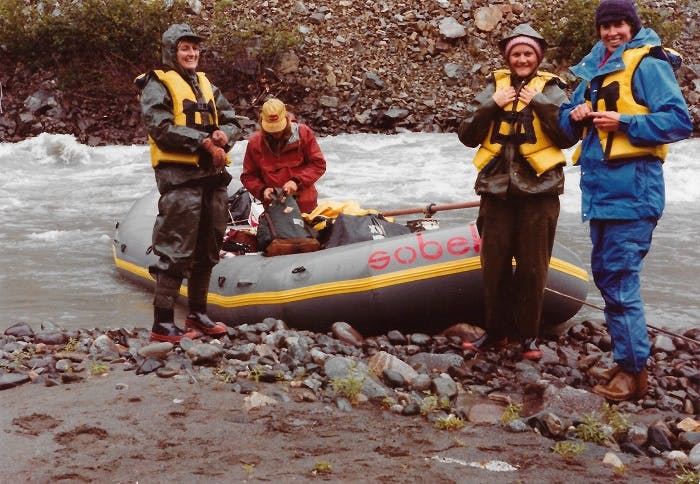 We sat around campfires and watched the Northern Lights. One night we built a teepee sauna, and into the small hours of the morning we emerged from it to splash in the ice cold river water. 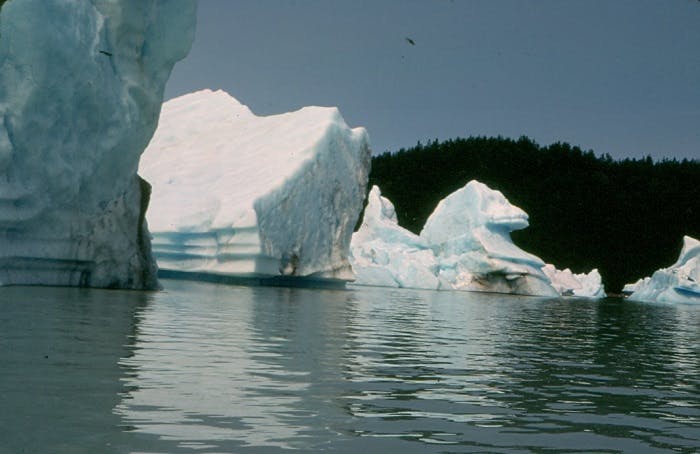 Crossing a creek bed while hiking, I got stuck in quicksand. My fear during the experience was not that I was sinking—which I was—but that I might lose my lobster boots and have freezing feet for the rest of the trip.  Fortunately, two fellow hikers helped me pull and push until my feet came out of the boots, along with two pair of Norwegian wool socks. And I saved my boots!

The sixth day on the river, John Yost had a malaria attack. John was part owner of Sobek Expeditions. His luggage had not arrived in Juneau, so he didn’t have the quinine he needed. One of the crew was a third-year med student, so he accompanied John down river. They took supplies and a rifle, which they planned to leave at the campsite by Walker Glacier, then continue to the fishing camp at Dry Bay.

Shortly after they departed, another event took our attention. A huge grizzly headed toward our campsite. It walked down a thirty foot embankment and strolled directly toward us.  As soon as he got our scent, he stood up on his hind legs, and every muscle in his body seemed to ripple as he turned and climbed the bluff.

We spent two nights at the base of Walker Glacier, and listened to it moaning and moving, and sometimes sounding like thunder. We felt it was allowing us to camp there, but telling us not to overstay our welcome. Climbing onto the glacier was breathtaking. While looking into the deep crevices with the melted ice gushing below, I discovered what the term “ice blue” really meant. 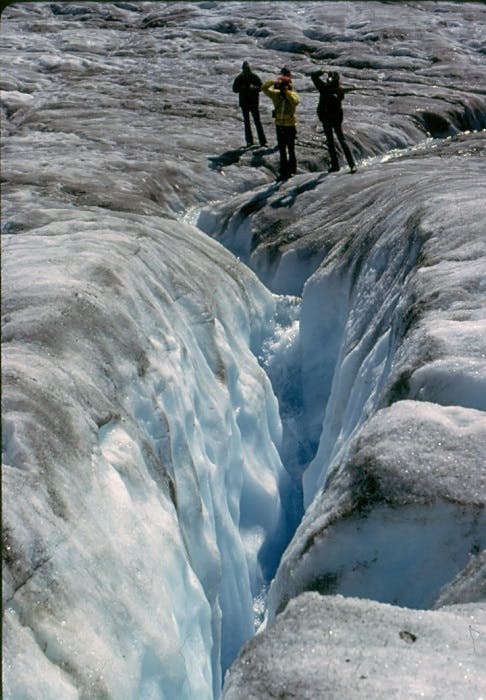 After pulling our rafts ashore at our last camp, we walked to a sandy bluff. When we reached the top, each person gasped in awe. It was Alsek Bay. There was a two-hundred foot wall of ice on the far side. It was Alsek Glacier. Massive chunks of ice were calving off the face of it.

The next day we unloaded two of the four rafts and carried them up the bluff, over the driftwood accumulated at the edge of the bay, and into the water. We heard thunderous sounds as enormous chunks of ice broke off, and we bounced with the waves that were created when those chunks hit the water. As the day warmed, the icebergs shifted, and some turned over, exposing the miraculous blue color of the iceberg’s underbelly. 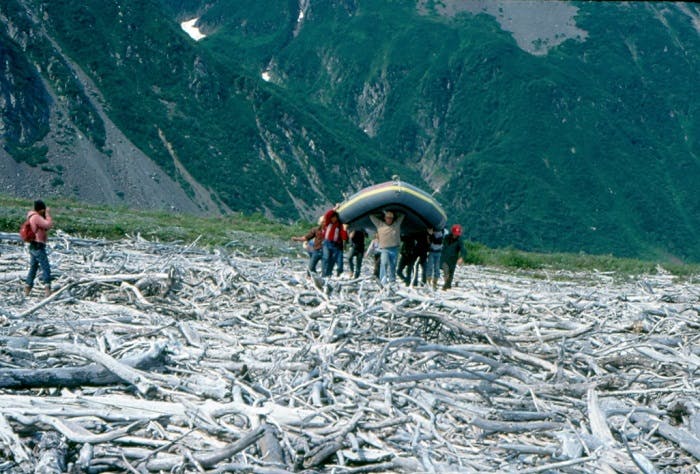 That night we all started feeling sad. It was our last night together, the last night on the river and, for me, the end of one tremendous, never-ending day. The next morning we were all very quiet as we broke camp and loaded our rafts. Without words, we expressed our feelings.

The last morning on the river was frightening for everyone, even the guides. The fog was so thick we couldn’t see the next raft. The icebergs were moving alongside our rafts at the same speed as the river. It was almost impossible to see them, but we could hear the roaring force of the water as it crashed against them. No one spoke. We were deep in our own thoughts. 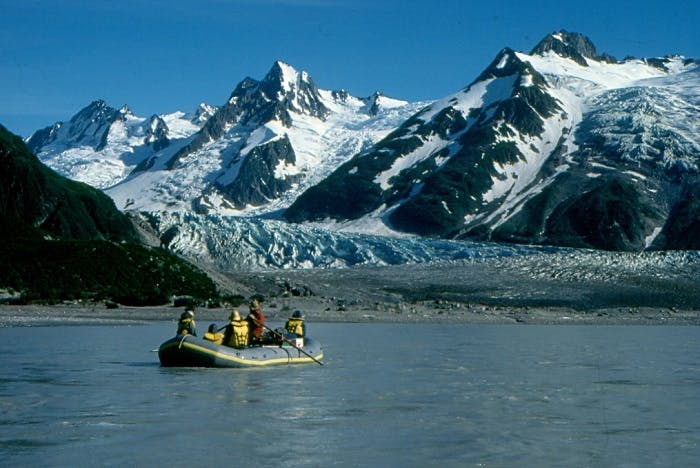 My thoughts turned to the words of conservationist Paul Brooks, who wrote: “Early in every wilderness trip there comes a moment of awareness…It is as if somewhere along the way a door has silently opened and you have been invited to come in.”  As I traveled that last mile on the river, I felt that. Just as the Tat had dramatically welcomed us in, the Alsek was powerfully saying good-bye. 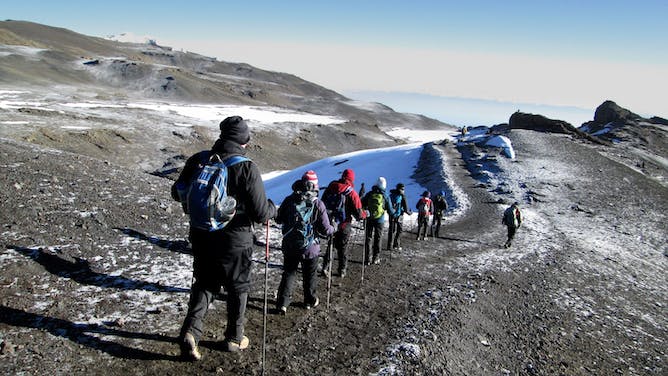 As a child I grew up watching Johnny Weissmuller play Tarzan on my black and...
read more 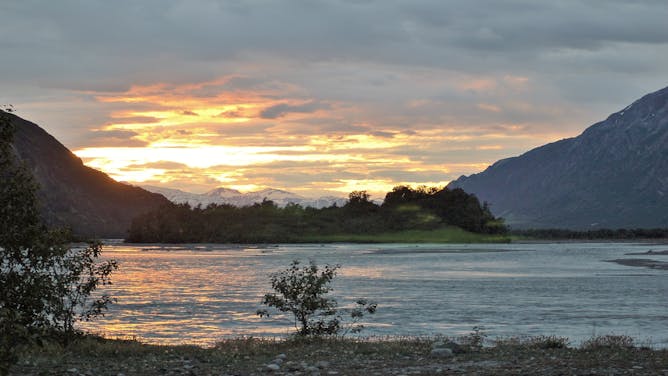 Summer Solstice at the Center of the Universe