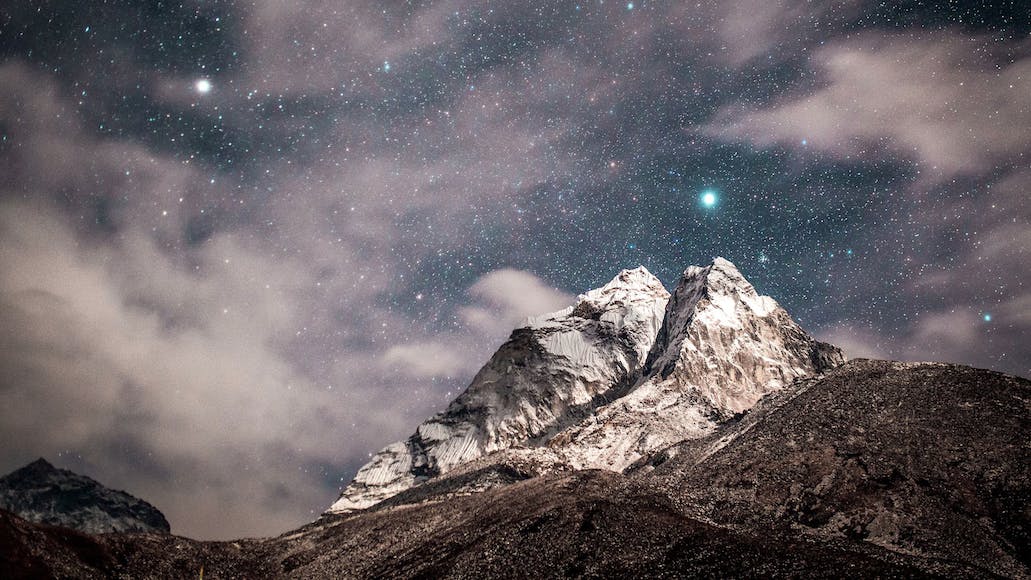 Finding Footholds in the Darkness

1st Place Competition Winner! What the judges say: David’s story moved us with elements of loss and growth, and beautifully evoked the courage of a blind fellow traveler “daring the trail in total darkness.” Congratulations, David!

Imagine you’ve lost your sight, or recently lost a daughter, or a wife to cancer. Or imagine you are trekking the Himalayas with three old friends who have dealt with those realities.

I’ve been enjoying outdoor adventuring most of my adult life. But in 2014, at age 67, I was fortunate to plan a trip that had personal impacts on three of our group members and, by extension, memories that our group will treasure forever. 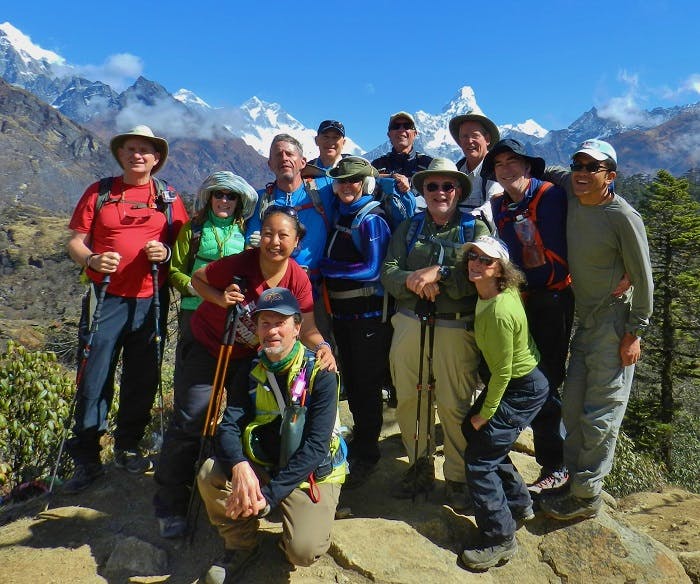 I always hoped to do the Everest base camp trail one day. When researching in 2014, I discovered, with MT Sobek, I could experience the Khumbu by doing a two-week trek along the Everest trail to the base camp of a spectacular mountain called Ama Dablam.

With one email to friends, I had ten say “I’m in” within two weeks. Our group included Dennie and Nancy from Wyoming, Dan, Jeff, John, Glenn, Eva, and myself from Tennessee, Gregg from Georgia, and Gerhard from South Africa. While all experienced hikers, most of the group had never done anything like this. However, several had significant personal motivations for taking this on at this stage of their lives. Gerhard, my brother-in-law, has been blind most of his life and at age 66 this was an opportunity he could not pass up. Gregg had lost his wife to cancer a year before the trek. John had lost his adult daughter nine months before the trek.

As we were beginning our trek, Binoy, our trip leader, introduced Kalyon, and Behm, who would be with Gerhard every step of the way. After watching them guiding him, it was clear to me that he was their new brother and they were taking great care of him. 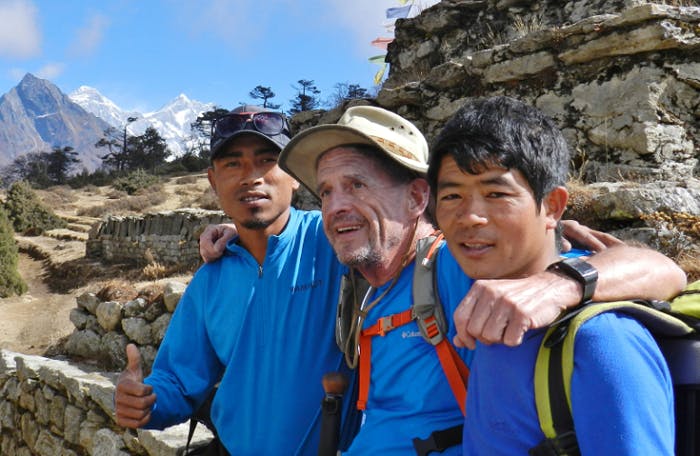 From the moment he began the trek over the extremely rough rock path and continuous up and down at high elevations, Gerhard said he quickly understood this would be the toughest thing he had ever tackled. Each step brought his foot down on an unknown and extremely uneven surface he had to adjust to in a microsecond. The rest of us took our inspiration from Gerhard. Whenever we struggled, we just watched him, daring the trail in total darkness. However, the trip was sensorially stimulating with a myriad of sounds and smells as we shared the path through Sherpa villages. 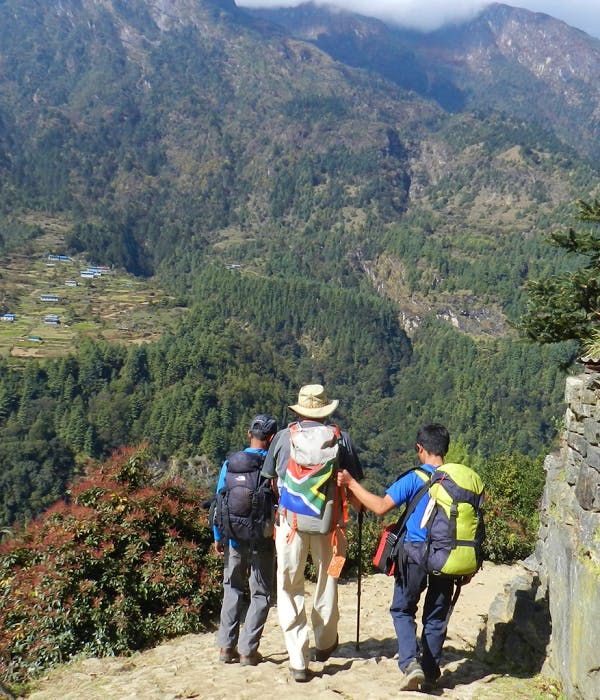 As we trekked, we were immersed in the Sherpa Buddhist culture, resonating with its guiding principles of the way to lead one’s life. John had been carrying ashes of his daughter in his backpack with the hope of finding the right place and time for them. After gaining confidence in Binoy and our head guide, Lhakpa, he shared his situation. They arranged for him to meet the Llama of the region in Tengboche who gave the approval for an appropriate Buddhist memorial.

On our summit day an unexpected event occurred. From John’s posting on his Facebook page: “With the help of our guide and the Sherpas, we built a stone stupa, or tomb for my beloved Jordy’s ashes. The spot the guide picked was incredible, laying on a knoll in a high mountain meadow at about 14,500 ft in sight of Mt. Everest, Lhotse, and Ama Dablam, and one more…Pumori, which translated means, Daughter Mountain…unbelievable! Our guide says the Sherpa people will respect this, and it will be there for many, many years. I have felt a peace today after doing this that has eluded me for the last ten months.”

And, Gregg’s perspective on the experience: “We built the small cairn and placed the ashes inside. Some fragrant shrubs were lit and prayer flags were strung from the little stupa. Lhakpa chanted and we repeated, ‘Om Mane Pahdme Om.‘ Lhakpa’s voice trailed off. I could feel my grief lifting with the smoke and trailing off as the chanting got quieter. We hung scarves from the prayer flags as an offering to John’s daughter.” 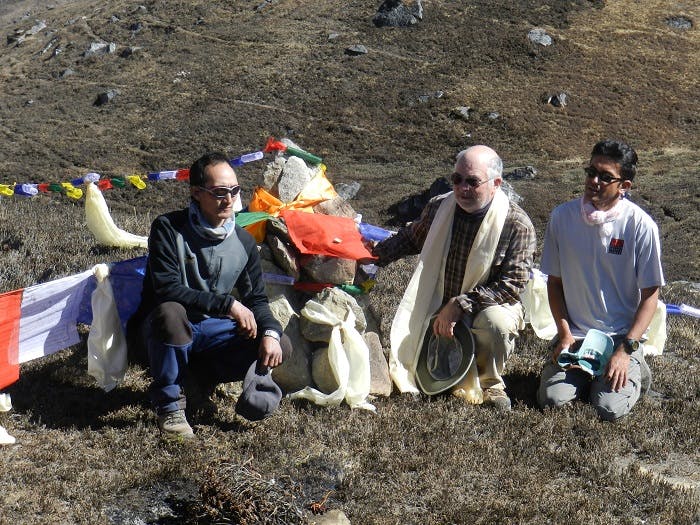 Gerhard then astounded us all with an impromptu Christian prayer that somehow captured what we each would have said if we had Gerhard’s unique insight and speaking skill.

Another miracle. Gregg had been encouraged by a friend to call Aparna, while in Kathmandu. He did so, immediately connected, spent time together there, and now, in his words…”I will live here in Nepal for the foreseeable future. After two months, I have a strong sense of belonging. I feel this is a place where I will continue to grow toward my full human potential. Aparna and I fully support each other. Our life together is fulfilling and continues to blossom.” 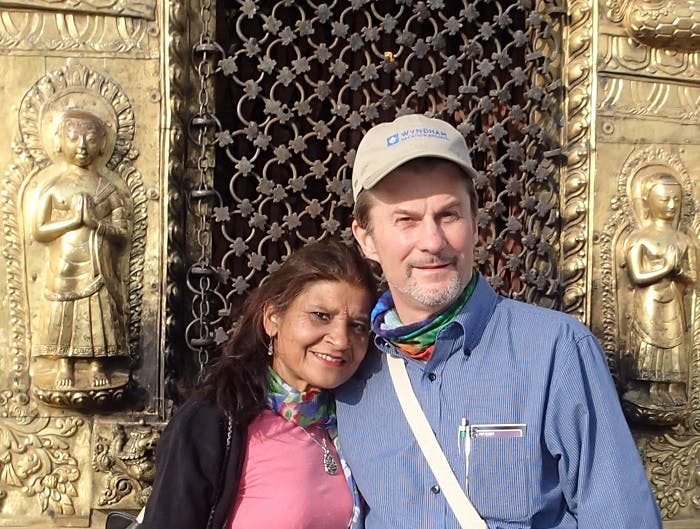 Upon his return, John named his farm, Pumo Ri, and this year, five years after our experience, we received a photo of the stupa from Binoy as he passed it by again. It looks the same as it did the day we built it. 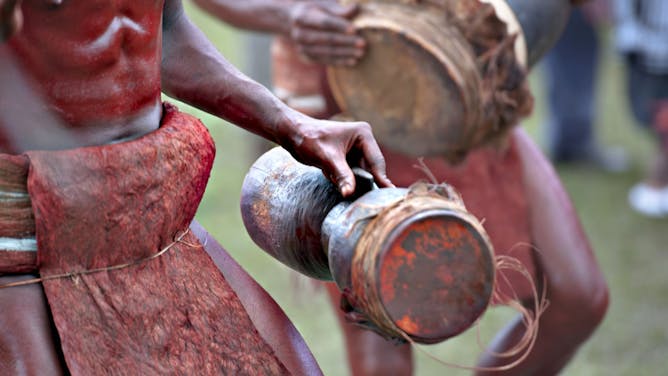 At the age of 42, I had just gotten married for...
read more 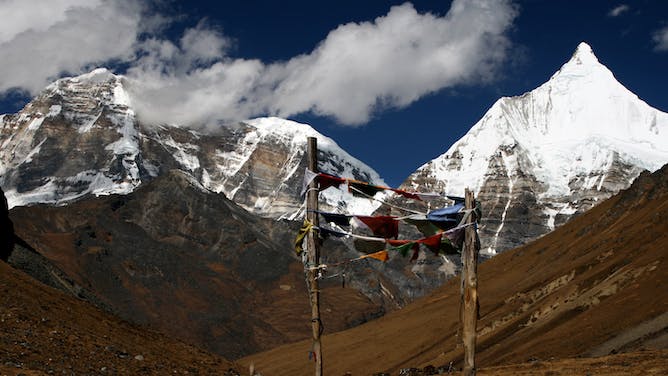 The Snows of Chomolhari

Thanks for letting us know!
This is how we improve bertha
What did you expect to happen?
Ask Bertha to Write About Anything
From email subject lines to full on blog posts and even Facebook adverts
Copy to clipboard
Add to Favourite
Report
Insert Default Content