In 1986 my parents won a trip to Nepal with Mountain Travel—the Annapurna Sanctuary trip. Seven days of cultural experiences mixed with camping and trekking in the beautiful north-central Himalayas. They were living in San Francisco at the time and had both heard of Mountain Travel. My dad, an Eagle Scout, member of the Appalachian Mountain Club, and general hard-core outdoorsman knew of the company’s reputation as a leader in active and adventurous trips and my mom, a lover of travel, was just as excited, “it was the coolest company around. It was the company guaranteed to give you the experience of a life time.” 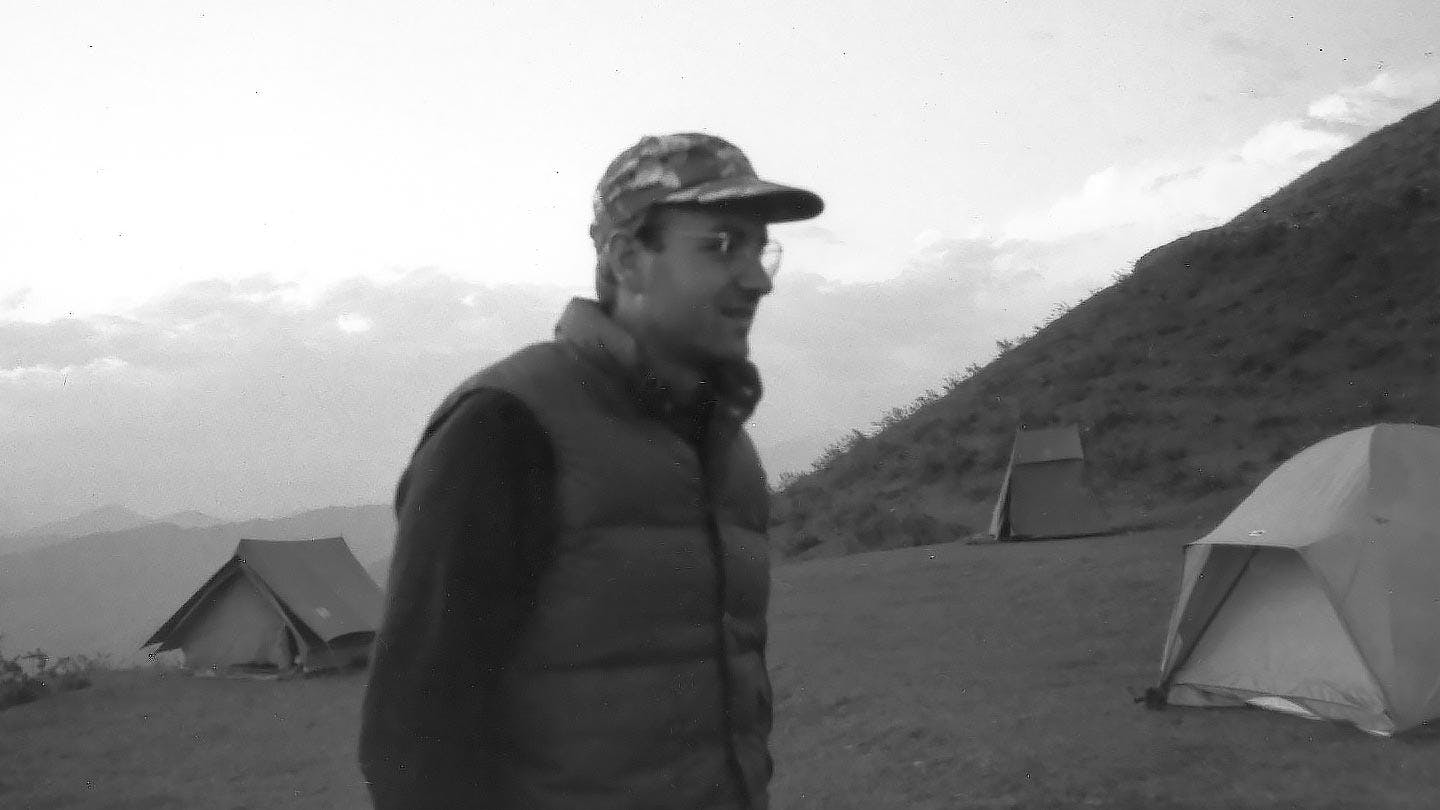 They packed their bags with the requisite brightly colored 1980s windbreakers and their hiking boots and headed to Kathmandu. Because of a flight delay they didn’t reach the group until day two of the itinerary. One of the in-country team, a Sherpa named Shiva Karka, met them in Kathmandu and drove them 150 miles along rough mountain and cliff side roads to the city of Pokhara, the gateway to the Annapurna Circuit. They arrived at the Fishtale Lodge under the cover of darkness, unaware of the breathtaking views that would greet them in the morning. 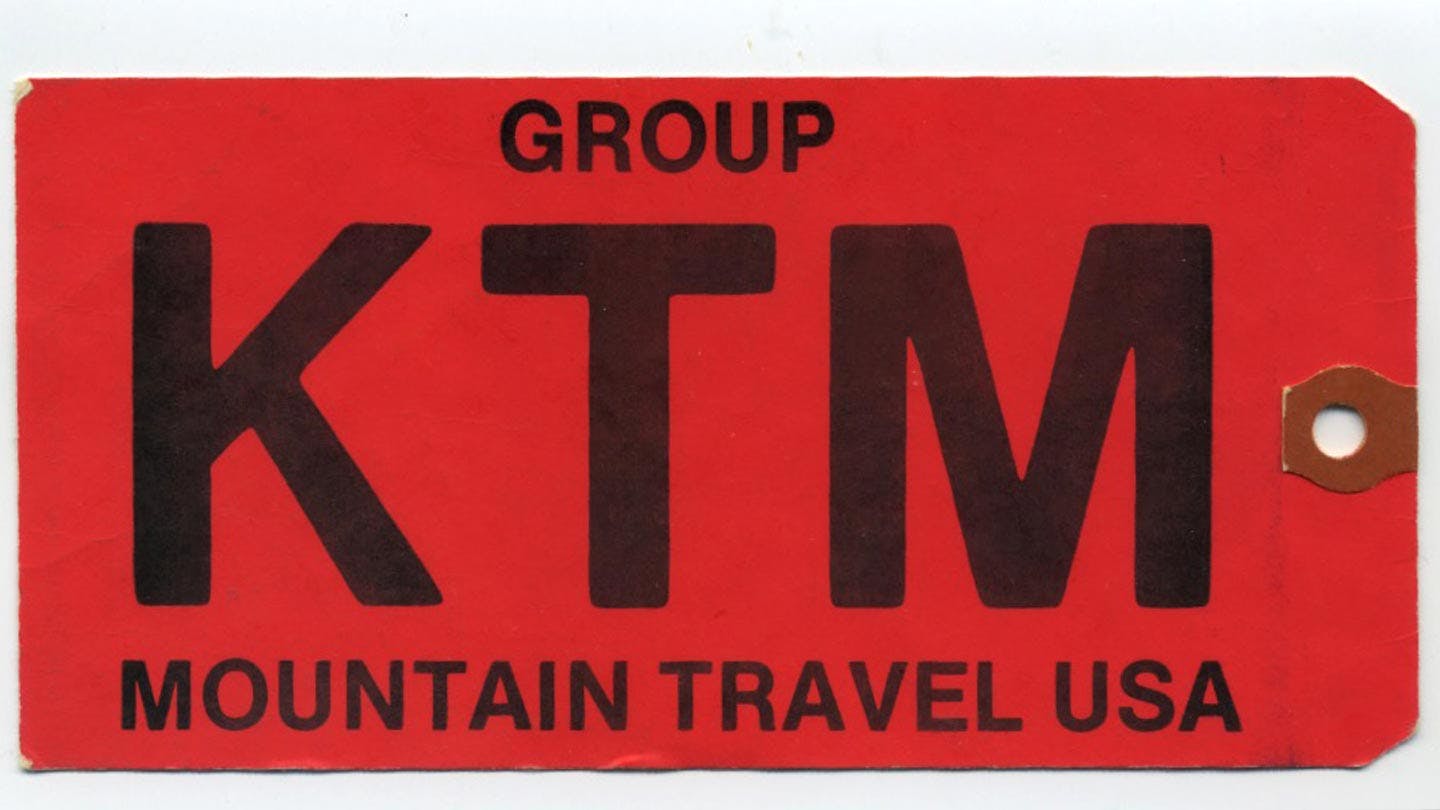 They began their trek, led by guide Charles Gay, from the side of a road the next day. My dad remembers hiking through farmer’s fields, meadows of tall grasses and wildflowers, forests full of monkeys and coming across small villages dotted amongst the mountainous landscape. He even remembers the guides and Sherpas recounting stories of the tigers that roamed the forests between Nepal and India. My dad wasn’t used to having others help and carry his gear, he didn’t want the Sherpas to think that he was lazy; he was a well-seasoned backpacker after all. But after seeing their mountaineering skills in action, carrying large baskets full of supplies over the rough terrain, while wearing flip-flops no less, he was in awe. 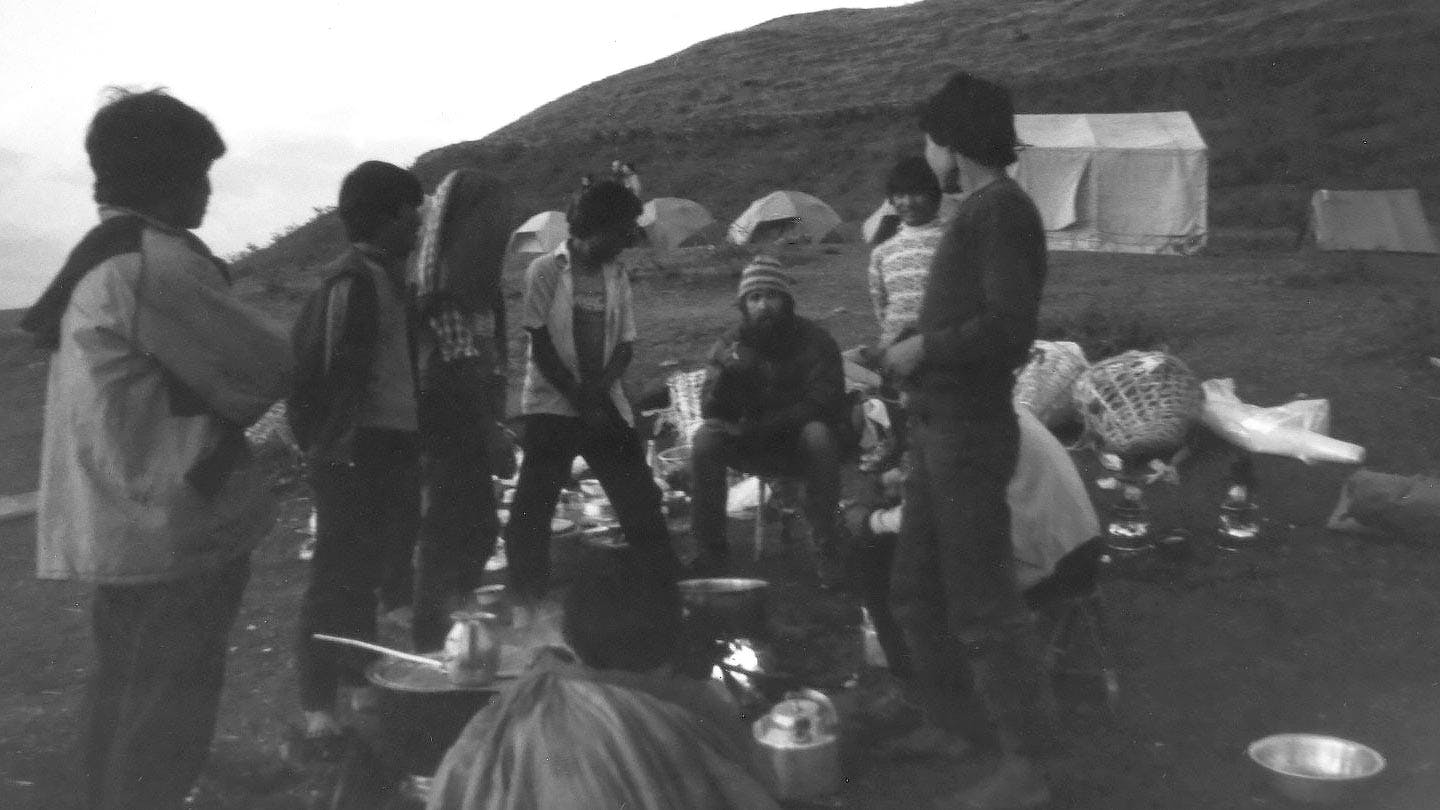 Dad said, “[I was] so glad I got to see the scenery over there and I really appreciate the fact that it was so different to what I’m used to. A real wake up call [at that time] to see how many people live so differently.” 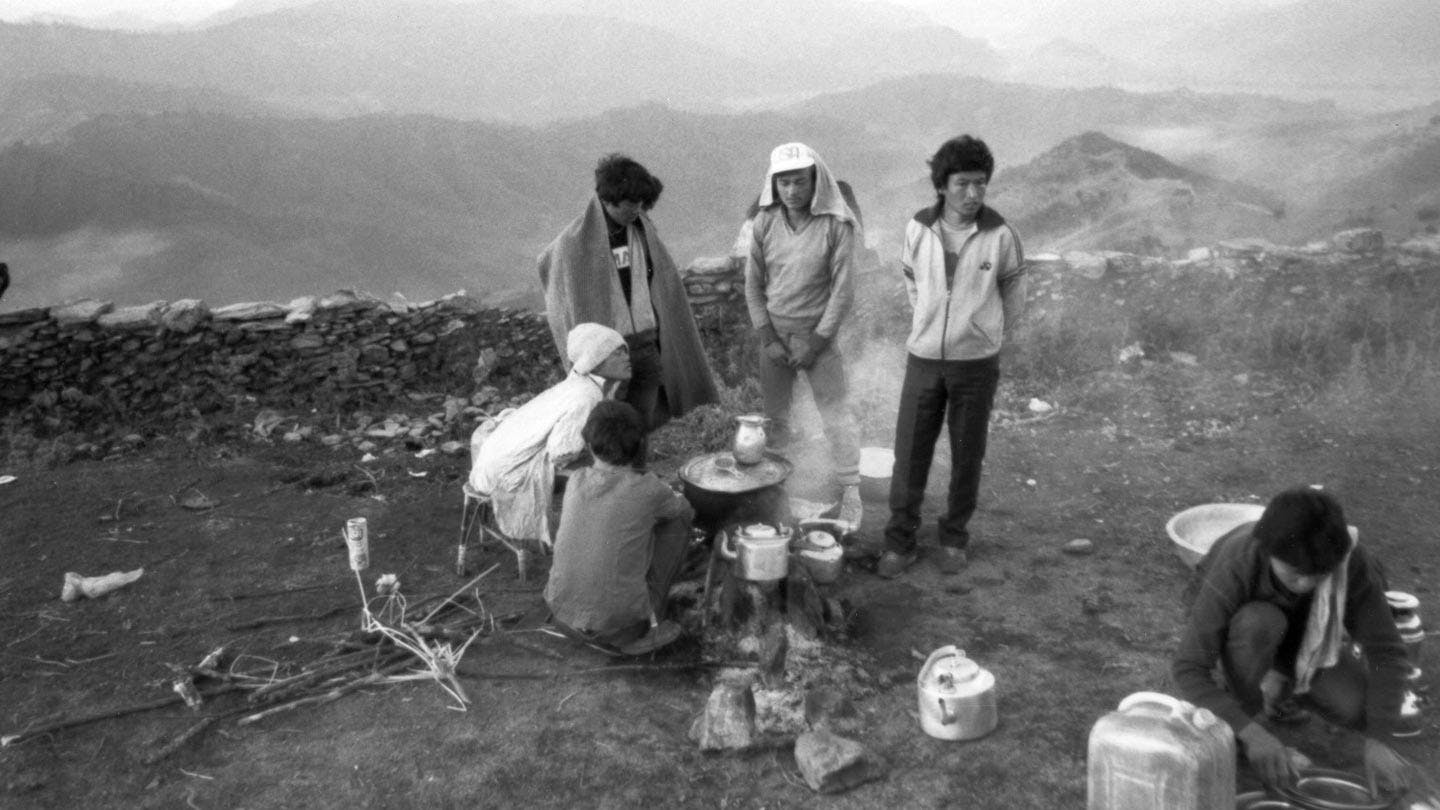 “We spent three days trekking and camping on Annapurna. The days that we were back in Kathmandu we stayed in this fantastic, wonderful hotel. We saw the temples, we went to the Ganges and we saw traditional funeral pyres,” recounted my mom. 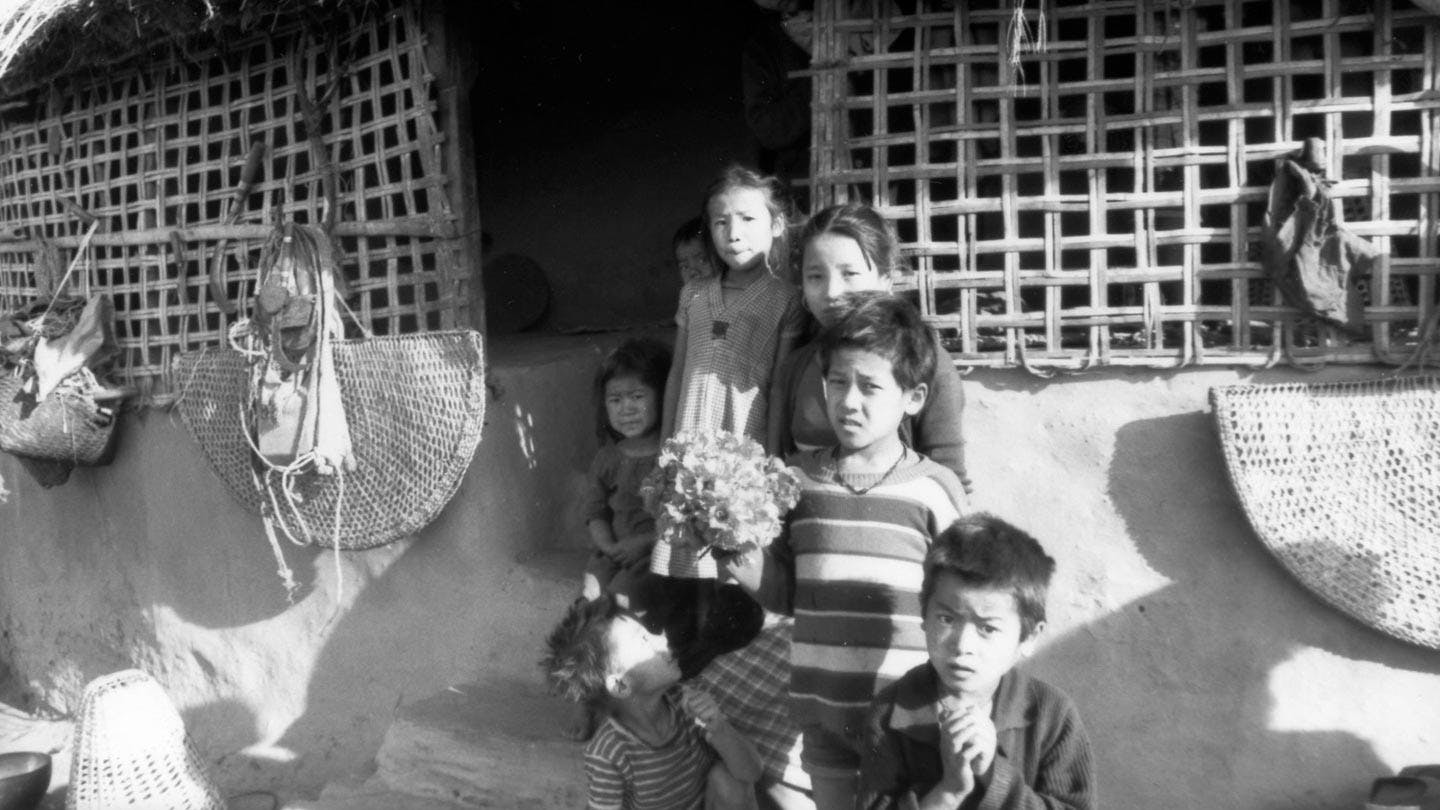 In 1986, the same year my parent’s visited Nepal, the nuclear reactor in Chernobyl exploded, Oprah Winfrey’s talk show debuted, the space shuttle Challenger disintegrated, and the UK and France announced the construction of the Channel Tunnel. It was a time for new global connections, social change, and innovation, however, many aspects of everyday life for the western world didn’t involve that kind of cultural immersion. The experience that my parents shared in Nepal had a huge impact on them and their outlook on the world. It spilled over, permeating their lives after they returned home, got married, and had two children. The souvenirs they picked up lived in our house as reminders of this trip—the small replica of a Sherpa’s basket hung on the kitchen wall full of lemons, I took the tiffin that my dad bought to school as a lunch container and the thunder bolt that my mom purchased in Kathmandu hung on her key ring, a symbol of power and protection. 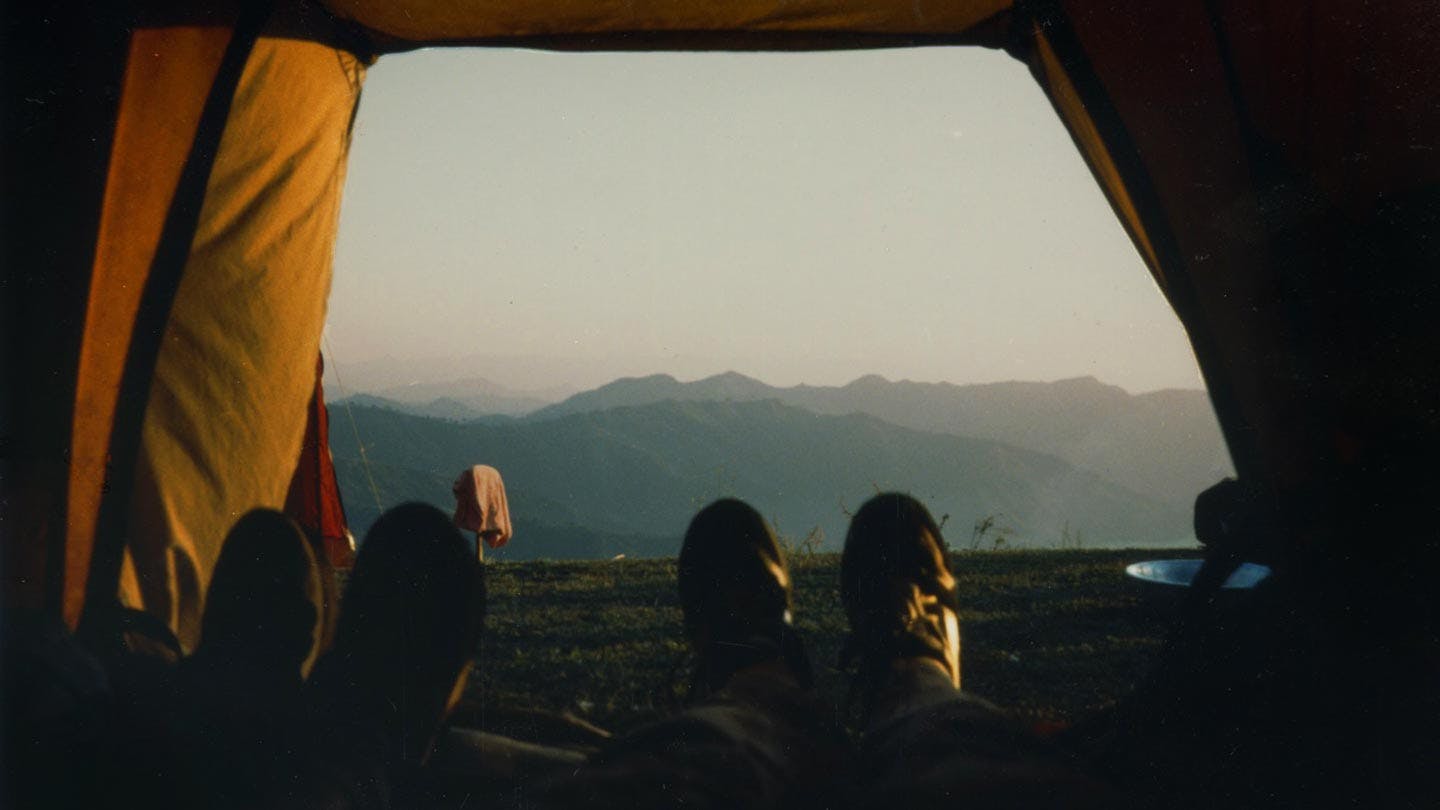 Travel as a means of self-reflection, transformation, and growth has always spoken to me. Through visits to our National Parks and 20+ states, trips to the Caribbean, travel around Europe with family and a semester living in Brighton, England where friends and I took every opportunity to explore the amazing countries right at our door step I immersed myself in all that was different and thrived when those differences in culture created a common bond between myself and the locals I was lucky to spend time with.

I owe this trait, in part, to the Mountain Travel team working away in a small Bay Area office in 1986 and I am proud to now be a part of that team. Learning about the job was as much of a gamble as my parent’s winning their trip—I bumped into a former co-worker at the post office and she told me she had landed a job at a travel company, MT Sobek, and that I should apply. When I told my parents about the opportunity they both reacted with surprise and excitement and I knew I was in luck— “Mountain Travel, they sent us to Nepal!”

Travel Chat with My Mom

Susannah: “You’ve talked about your trip to Nepal for my entire life.”

Susannah: “Why do you feel that way?”

Mom: “Because I’d always wanted to go there. It’s a place where lots of people never go and it is a special place. I mean, it’s beautiful, it’s complicated, and the people are beautiful; they were kind, they were lovely. I really felt like the people have a different way of going through life. Even as difficult and hard as life can be there’s serenity to just having this connection to earth that I don’t think we have here… Travel has always been really important to me.”

Susannah: “Yeah, and I think you’ve instilled that in both of us. It’s a privilege. You’ve instilled in us that it’s a huge gift to be able to [travel] and to reap as many benefits as you can from that gift. And to not take those experiences for granted and try to immerse yourself and adapt.”

Mom: “And have a sense of cultural relativism. Just because it isn’t the way you would do something or the way you would want your life to be, it doesn’t mean that the lives those people in other places lead are somehow less than… it is a privilege to have our passports accepted and that people don’t view us as a threat or as people they want to keep out, they want us there. I think we are very lucky. It’s important to teach children that the world is a bigger place than just what’s in front of them and that’s what I tried to teach you guys.”

Susannah: “I think you did a pretty decent job. And even if we didn’t always have the resources to travel, to go back to Nepal, it was always a part of my life, as much as it could be, having not gone on the trip. Does that make sense?”

Susannah: “When I was in Southern Africa I just felt so so lucky to go to a place that I know would be a huge stretch to go by myself but to travel with and to work at a company that had enough confidence in me to send me to that place and wanted to invest in me to go there, I’ve never been in a situation or place where I felt so lucky for so long. I just really enjoyed being there and to get a glimpse of how other people live, on a daily bases, it’s just a gift.”

Mom: “I think the thing that I really liked about the trip was that Mountain Travel does all the work to turn a tourist into a traveler. It turns you into someone who is able, because they’ve taken care of all the hard stuff, to really enjoy the place and really see it in a way that makes you appreciate the culture. Appreciate the differences for how beautiful they are and not as just other.”

Susannah: “I often times feel the history of what we are doing.”

Mom: “It’s a special company. It’s endured. It’s brought amazing experiences to thousands of people and you can’t discount that.”

Mom: “I think I just saw that there was a different way of being. And look at how this has permeated your life and your sister’s life. It made me into a person who had really been to Nepal. You see the large and the small at the same time—we saw these vast mountain vistas and then we’d walk through a village and see things like these children who had strung a swing. I haven’t thought of this in years. They had strung a swing between two poles and were swinging on it. It was like, wow, kids are kids everywhere.”

About the Author Susannah Starr

1.888.831.7526 Live Chat
We use cookies to ensure that we give you the best experience on our website. If you continue to use this site we will assume that you are happy with it.OkPrivacy policy