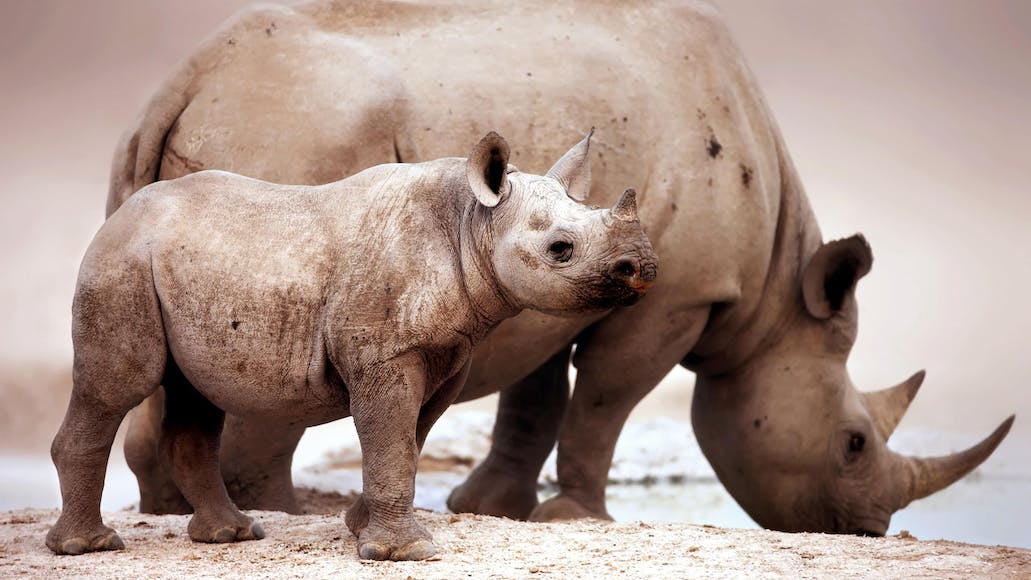 Searching for Endangered Rhinos in Namibia

Namibia is a timeless land that offers one of the world’s most unique safari experiences: tracking endangered desert-adapted black rhino on foot. In collaboration with our friends at Huab Under Canvas, our journey to see black rhinos begins in Namibia’s northwestern Kunene region. This one of the last great wilderness areas in Africa that supports a truly wild population. Black rhino occupy massive home ranges; their distribution stretches across 5.7 million acres of arid communal range lands. It takes a keen expert to track the rhino herd down but, once found, it’s a powerful (and very rare) sight to witness.

The black rhino population of Namibia’s Kunene region is unique in that it is one of the world’s most important groups to have survived outside a formally protected national park or game reserve. Historically, desert adapted black rhino (Diceros bicornis bicornis) were found across almost all of Namibia and the western parts of South Africa but, as a result of droughts and poaching, they are now limited to just northwest Namibia where 90% of this subspecies occurs. 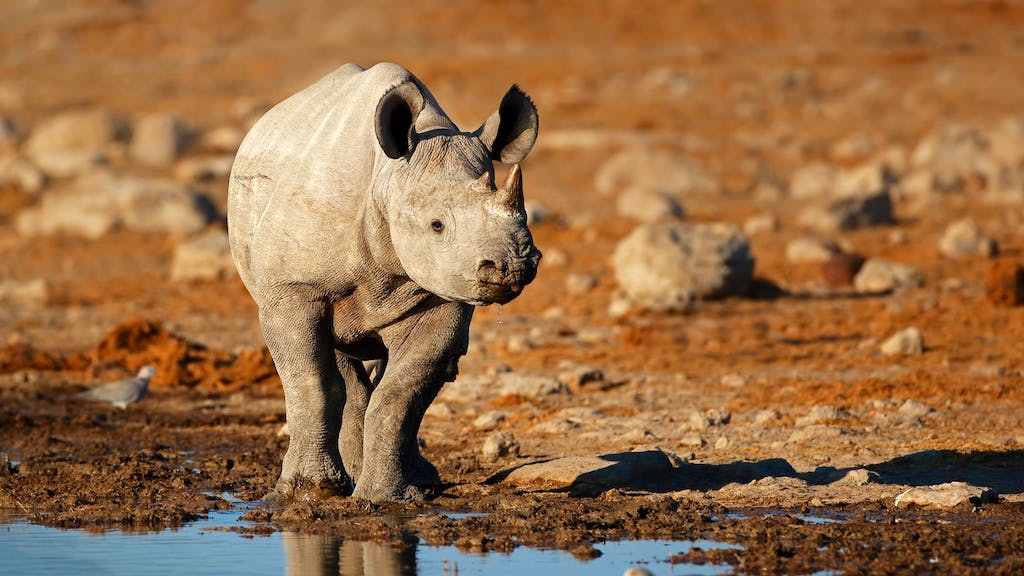 This particular population survives in the most extreme conditions, generally with minimal rainfall per year on a sparsely vegetated landscape. Black rhino are exclusively browsers and use their prehensile lips to clip vegetation from bushes, shrubs and trees, showing a preference for the Euphorbia damarana, Euphorbia virosa and Terminalia prunoides found in this region.  As a result of the harsh environment and the limited resources, home ranges can be up to ten times the size of those of other rhino populations, making space and habitat some of the key conservation variables for the species in these conditions.

Unlike the majority of game viewing you might do while in Namibia, the tracking of desert adapted rhino needs to be done on foot. The rhino in these dry parts of Namibia can seldom be seen from roads as they prefer the protection of hills and small tree-lined dry runoff lines. This means you can’t just see them from a vehicle, you need to go out to look for them, and the distances that have to be covered to do so can vary. Black rhinos are large animals, and potentially aggressive on account of their fairly poor eyesight. As a result, going out to look for them is not an activity that should be taken lightly. Added to that, our aim is to have as little impact on the animals as possible, so our hope is to enjoy a sighting and then leave without them ever being aware of our presence. 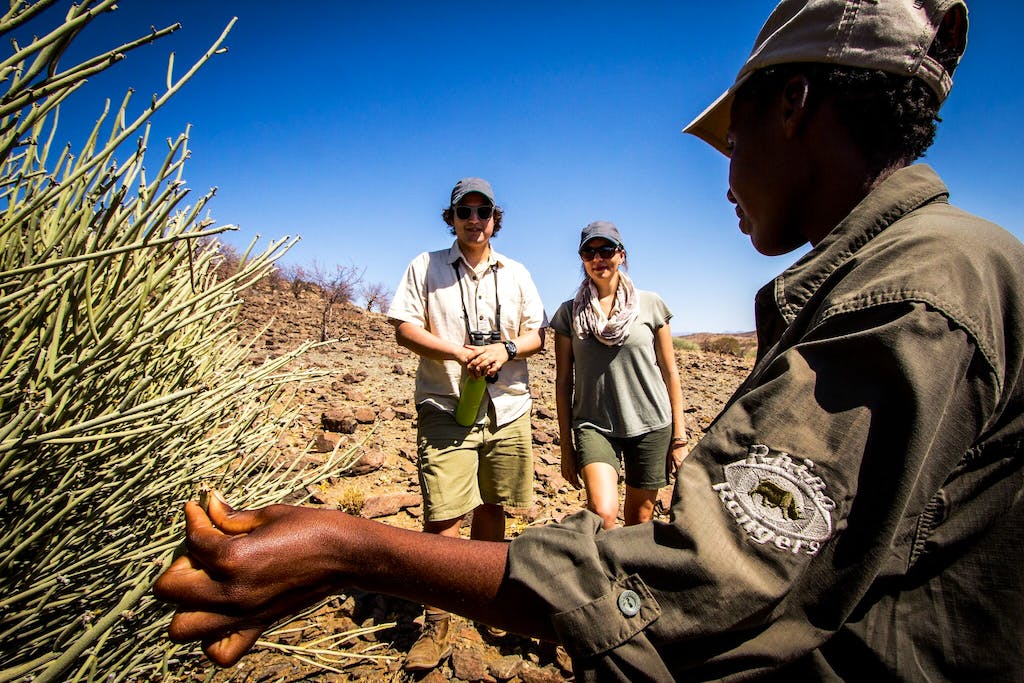 The rhino ranger teams head out into the field at sunrise to visit the limited water sources in the area, mostly natural springs, where rhino drink frequently. Desert adapted rhino drink mostly at night as there is then more water available at the natural springs than there is during the day when evaporation levels are higher. Rhino rangers therefore start to track from here if they find fresh signs. One team will normally be taken out and dropped off by your guide while the other team heads out on their solar E-mountain bikes which allow them to cover far greater distances than they could when patrolling on foot. When a rhino is located they communicate with your guide via radio to let him know where they are and he will then take you out to join them.

//Huab Conservancy has two teams of highly trained and experienced rhino rangers, all of whom hail from the local area. Namibia currently has sixty full time rhino rangers, five of whom operate here. The presence of these rhino rangers has increased field patrols by 750%, rhino sightings by 450%, and is estimated to have helped reduce poaching by 80% between 2013 and 2018. 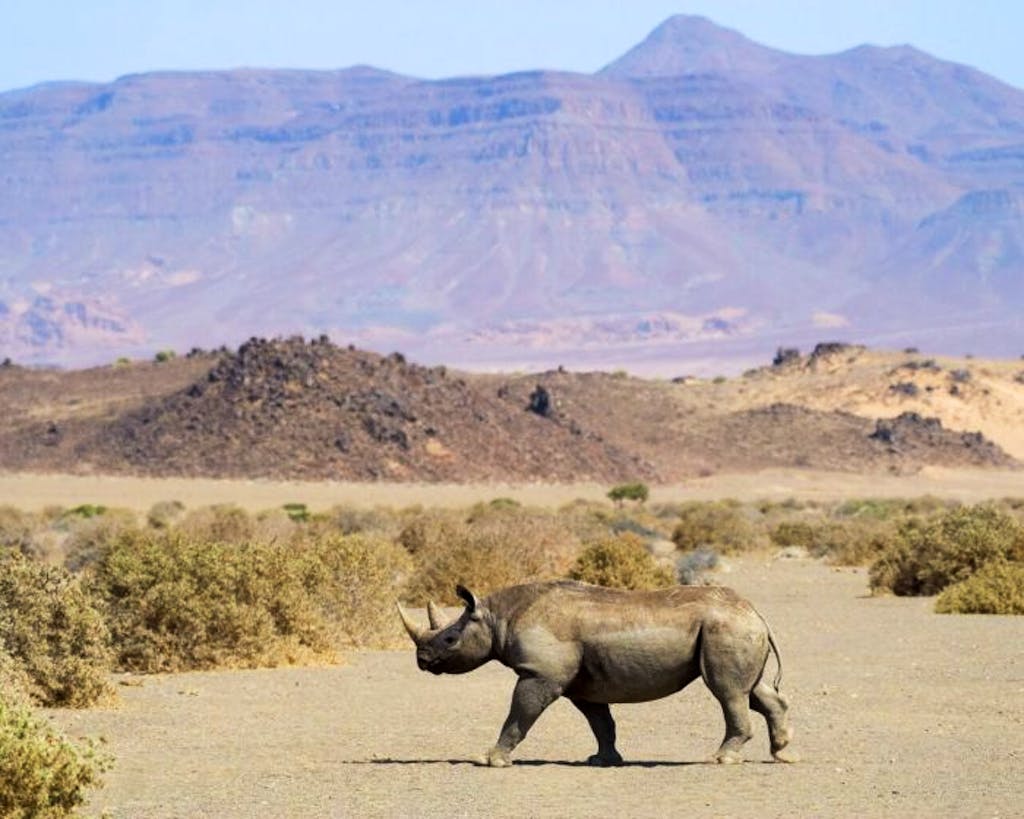 Save the Rhino Trust (SRT) was instrumental in the translocation of black rhino back into this conservancy area after years of poaching had resulted in them becoming locally extinct, and SRT has a long standing relationship with both Ultimate Safaris and the //Huab Conservancy. The initial number of rhinos re-introduced was small, but they have been constantly monitored by the Conservancy Rhino Rangers to ensure they remain safe and that this confirms the sustainability of the project. The introduction of light footprint tourism has provided more funding, increased the protection of rhino, and paved the way to increase numbers. This brings higher tourism demand and therefore more revenue generated from rhino tourism which then goes to the custodians of this area, the communities that live here.

Interested in seeing black rhinos in the wild? Check out our Ultimate Namibia Safari. 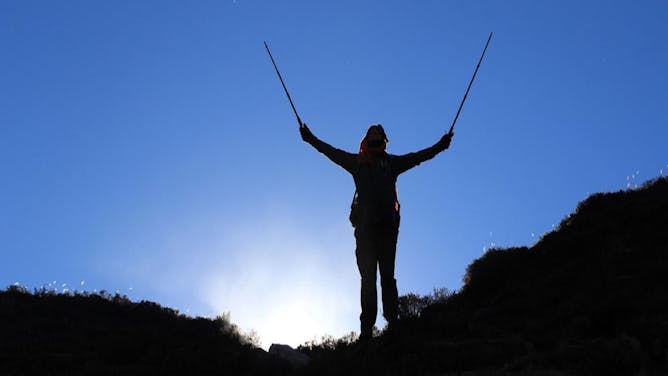 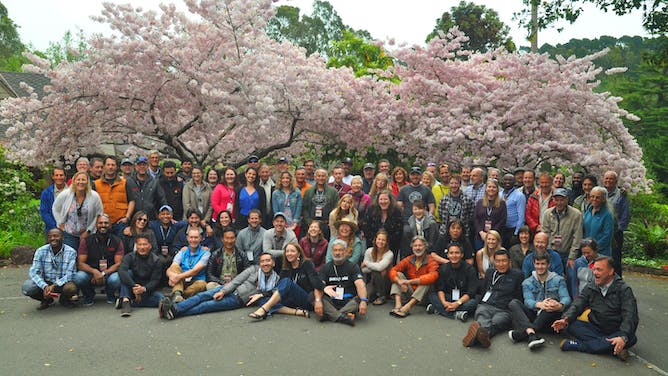 Seventy guides from 30 countries around the world recently made the...
read more