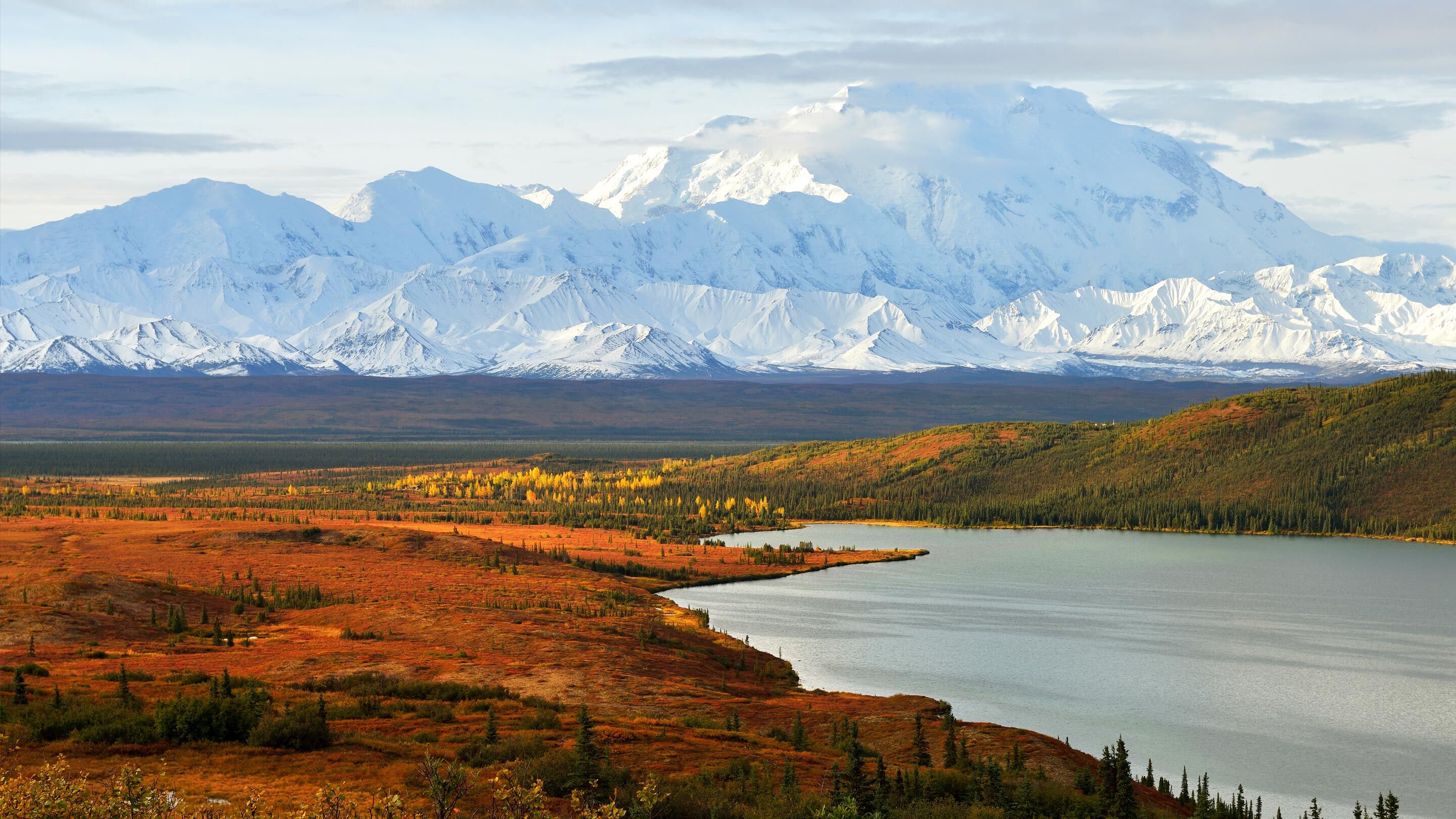 The roaring sound increased again and the tent wall pressed against my back. I leaned hard into it, hoping to relieve the strain on the fiberglass tent poles before they snapped. My two tentmates did the same, their expressions sober. The tent fabric began to fray. Suddenly, the tent door was unzipped from the outside and the three members of our party from the tent next-door tumbled in. 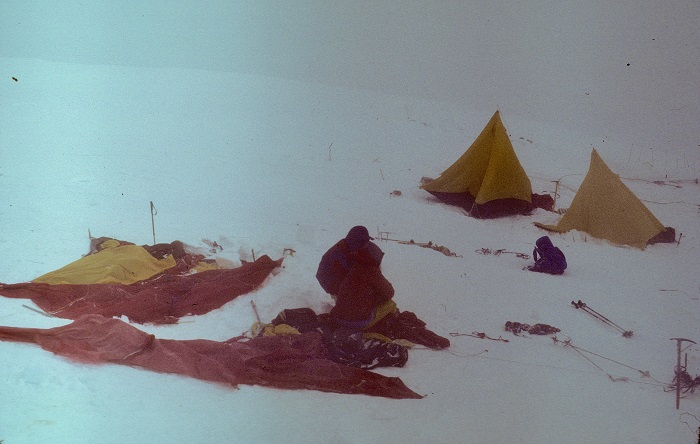 Their tent had all but exploded. “At least their weight will prevent our becoming airborne,” I thought to myself. But six climbers and their gear in a tattered three-person tent would not work. Then, our rainfly fabric started to shred. Our trusted Mountain Travel guide, Nic Parker, looked in, pointed to a nearby snow bank, and told us to get over there fast and start digging. I was pressed into the back of the tent and the last to abandon it. The tent whipped away, taking my air mattress with it. I dragged my gear, flattening myself against the snow during the strongest gusts, which threatened to take me where the tent had gone. Reaching the snow bank, we started digging a large slot and blocking the opening with cut blocks of snow. 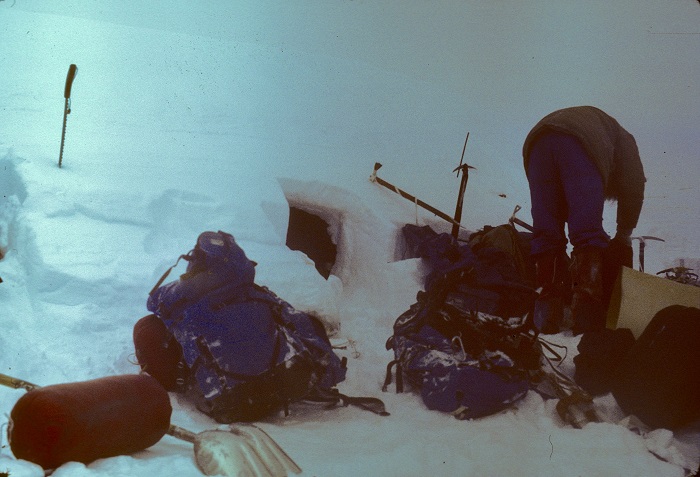 Nic, checking on me, discovered that I had lost feeling in my hands. He told me to quit digging and put my hands between my bare legs to warm them up. We housed our party of eleven, plus seven other climbers that we had collected, around the 17,200-foot level. Without an air mattress, I shared one with the next climber. I was the cave door until the wind abated somewhat several hours later. We beat a rather hasty retreat to the 14,200-foot plateau. 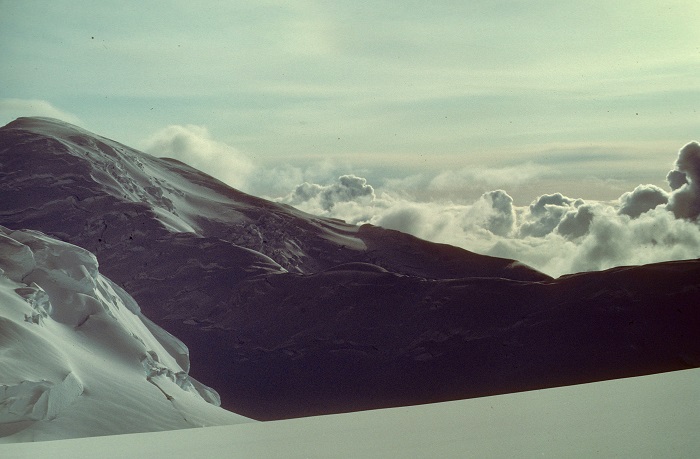 Denali (Mount McKinley) is a serious and unpredictable undertaking. The members of our party were all well-prepared and in top physical condition, but the summit had eluded us. The well-proven tents had been placed in proper platforms with snow walls around them, anchored by our ice axes driven deep so the picks and adzes were in the snow. Our leadership proved to be highly competent and resourceful. Ultimately, Mother Nature makes the rules, and doesn’t heed ours. If we were to experience the mountain’s sublime beauty, we must operate by Her rules: prepare well, but acknowledge that we are entering a place not all are meant to see. 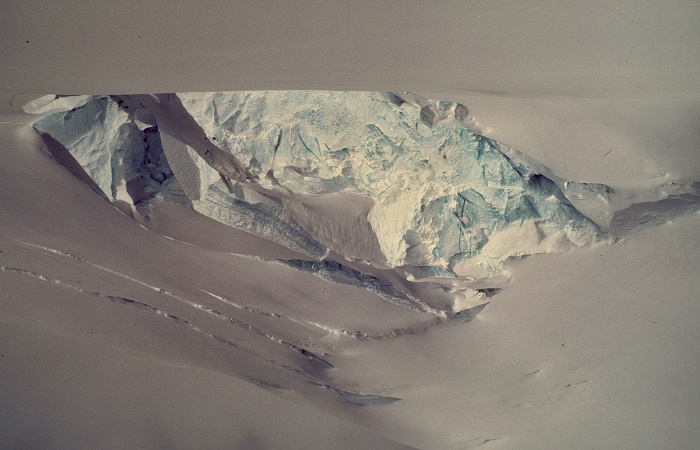 Far from being discouraged, I returned in 1985, reaching the summit. This time I endured confinement to our tent and short rations while waiting out ten days of storms. With Denali, you get what nature serves. No place I’ve been offers more exalted beauty or compelling adventure. 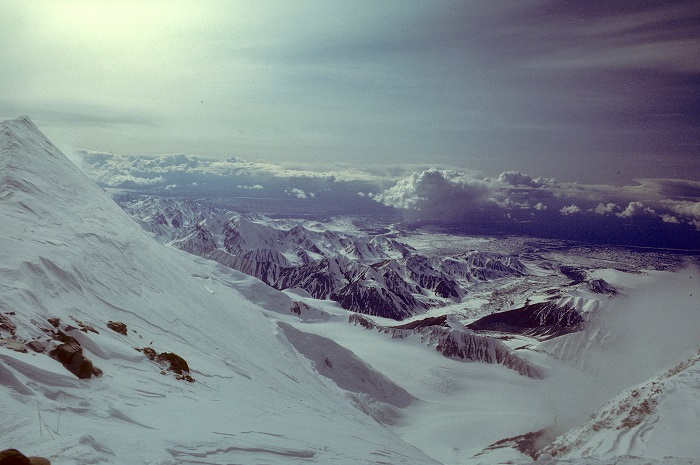 My three Mountain Travel trips, the first to the Alps in 1980, all took me to places not all were meant to see. 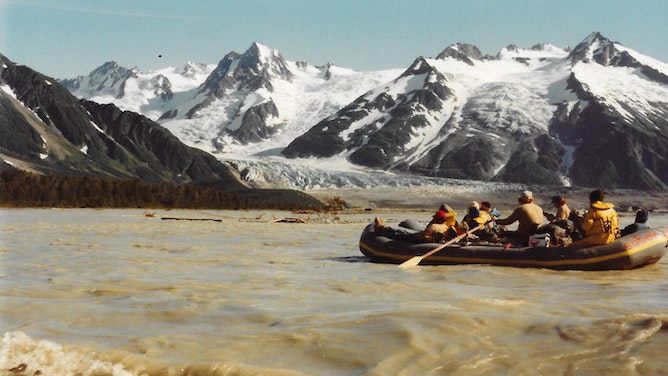 Rafting the Tatshenshini & Alsek Rivers in 1978

Rafting the Stanislaus River in June 1978, when that river was...
read more 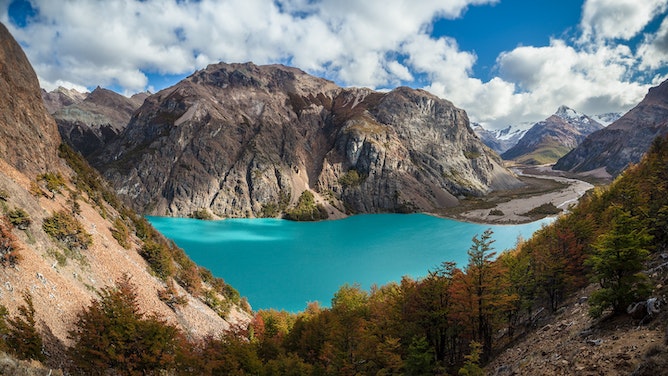 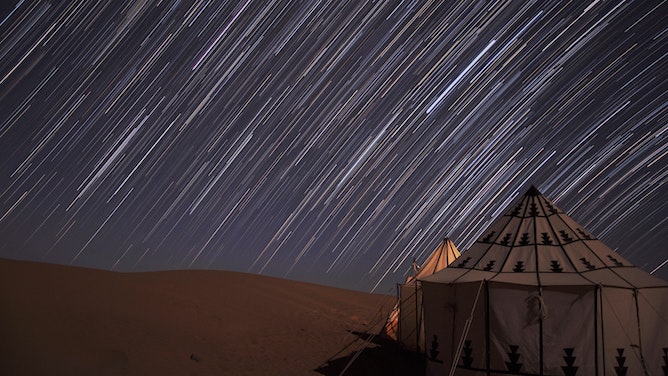